‹ back to previous page

Why Doesn’t Having A Tooth Pulled Hurt As Badly As You’d Think? 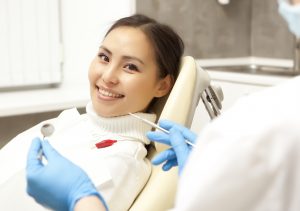 Having your teeth pulled is scary, but it seems like it always hurts a lot less than you’d think. Obviously, a lot of that owes to the painkillers used in the process. Before you even have the Lidocaine injected, you’ve already had the area swabbed with a numbing agent, so you barely even feel the needle go in.

What are the after-effects?

When you bang your toe, it stings for a week. When you pinch your neck, it seems like nothing helps. Why doesn’t it hurt that bad after having a tooth pulled? The empty socket is scary to look at, but it doesn’t feel like much but a gap in your mouth.

For the initial soreness, the fresh socket is still being numbed by the medication for a good long while after you leave the dentist’s office. It can last for as long as eight hours. If your appointment is in the afternoon, that will keep the area numb until the end of the day.

After that, the truth is that there’s not much to feel pain with. The nerve endings that cause pain in infected teeth are in the teeth themselves. These are essentially severed as soon as the doctor begins the extraction process, before they’ve even pulled the tooth all the way out of the socket. Your teeth are not like normal bones, where you just have a mass of calcium and marrow, they’re sensitive, as much a part of your mouth’s senses as are your tastebuds. With no tooth, there’s no tooth pain.

The socket itself is sensitive, of course, but not suffering any active damage following an extraction. It’s just not holding onto the thing it was holding onto a day ago. In other words, it’s not really a wound in the same way that a cut on your finger is a wound. As long as you keep it clean, you probably won’t have any serious pain resulting from the fresh tooth socket. Any swelling resulting from the initial extraction can usually be managed with the prescribed painkillers. Dry socket and infection are painful, but as long as you keep the area protected and clean, you can reduce the likelihood of both.

Why should I receive a tooth extraction from a dental professional?

A dentist’s experience level and technique can go a long way towards a painless extraction. Likewise, the difficulty of the tooth being pulled. With the right dentist under the right circumstances, a tooth can be loosened and pulled in less than a minute with minimal irritation to the socket. A fractured tooth might be a little more difficult, and a younger dentist might take longer in order to avoid hurting the patient by rushing the process along.

Maybe the biggest reason an extraction hurts less than we think it will is because most of us will only need a few extractions done in the course of our life, so we don’t have much of a frame of reference for how it really goes. In movies and television, it’s always some scary scene with the badguy trying to get James Bond to spill government secrets. The truth is it’s usually easier than a trip to the DMV.